UKRAINE’S HERITAGE, ECONOMIC POWER AND INVESTMENT OPPORTUNITIES ON THE AGENDA AT UHD DAY 3 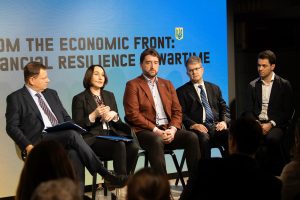 Boris Johnson, Member of Parliament of the United Kingdom and a Former Prime Minister of United Kingdom came to the joint space of the Ukraine House and Ukraine Is You to receive his Honorary Citizen of Kyiv Medal from Vitaliy and Vladimir Klitschko.

Day 3 opened with a discussion on Ukraine’s efforts to preserve its rich cultural heritage, despite historic sites being targeted mercilessly and systematically destroyed since the onset of this full-fledged war. Oleksandr Tkachenko, Minister of Culture and Information Policy of Ukraine highlighted that “This war is against our identity and we have had to fight to defend our Ukrainian language, history and culture”.

The day followed with a panel “Feeding the Most Vulnerable: Ukraine’s Contribution to Global Food Security”. Leading voices from within Ukraine and globally discussed efforts taken to alleviate hunger, including the Grain from Ukraine initiative, the status of the UN-brokered Black Sea Corridor, and what actions the international global community must take urgently to further avert widespread hunger in 2023.  José Andrés, Founder of the World Central Kitchen stated: “We should make sure that NATO create a safe corridor from Odessa and other ports so that grain from Ukraine keeps being shipped to countries that need it. Food is right now at the centre of why we must stand with Ukraine. Otherwise, the world will not eat.”

“Europe’s Next Great Investment Opportunity: Now and in Peacetime” panel included  distinguished leaders and investors, together with Deputy Head of the Office of the President of Ukraine Rostyslav Shurma, President of the Republic of Moldova Maia Sandu, and Chairman of the State Property Fund Rustem Umerov, who spoke about investment opportunities for those brave enough to look past the headlines today, as well as those making plans for when peace returns to Ukraine. President Maia Sandu highlighted: “We are safe because Ukrainians are fighting. It defends its liberty but also defends the liberty of the entire continent.”

The day concluded with a panel “Stories from the Economic Front: Business and Financial Resilience in Wartime”. AmCham Ukraine President Andy Hunder alongside distinguished speakers discussed the stories of tremendous resilience, bravery, unity, and determination from business leaders whose teams are on the ground in Ukraine, keeping the country’s economy running while setting the stage for future rebuilding and transformation.

Dmytro Kuleba, Minister of Foreign Affairs of Ukraine will speak via video link from Ukraine tomorrow about the path to victory. The panel will start at 12:00pm CET and will be moderated by Daniel Kurtz-Phelan, Editor of Foreign Affairs.