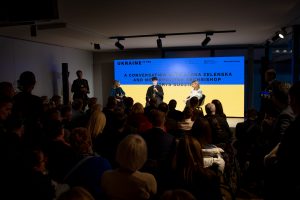 During the session they discussed the prospect of “Ukraine at Peace” and what a future Ukraine will look like. The First Lady said that “the consequences of what we are going through will be long term and we will have to face that reality. All of us in Ukraine do not live a normal life. Not a single person in Ukraine will say they are ok.” She continued that, “we are establishing a model of psycho social support that will be available to every and provide and cater to everyone.” And the Archbishop continued that, “you will see this country is going to an economic tiger, an ecological model and an inspiration not only during war but also during peace.”

Speaking of the relationship Ukraine will have with Russia in the future the First lady made it clear that “Our neighbour has to repent. They have to undo this evil they brought to our country. We don’t know how long it is going to take. We cannot wait for them to find their mind and become civilized.” The Archbishop agreed saying that “Russia will have to understand that the dignitiy of Ukrainians is something they will defend to the last drop of blood. It is a terrible thing to be an imperialist. We need to get Russians out of this by winning the war.”

Earlier in the day, Ukraine House hosted an inspiring panel made up of those brave men and women who have been fighting on the frontlines against the illegal Russian invasion. They discussed what it is really like on the frontlines: “We are at the very frontline and we live in trenches underground for weeks and weeks on end with the temp going down to -20 c in the winter. Several members of our battalion lost their limbs because of frostbite.” – Yegor Firsov. And the fact that, “what Ukraine needs now the most is military equipment to keep fighting.” – Masi Nayyem. Juliia Paevska also made it clear that what Ukraine really needs is “Justice.”

This was followed by a panel on the work that Humanitarian heroes have been doing to provide all the supplies and equipment that the military heroes need on the frontline as well as all the work that has been done to evacuate Ukrainians to safety. Pediatric doctor Iryna Kondratova who arrived in Davos from Kharkiv had a message for the world from her fellow Ukrainian doctors “Don’t forget about us. Kids are dying. This should not happen.”

The Ukrainian President, Volodymyr Zelenskyy will be joining the house via video-link on Wednesday January 18th at 18.30 CET. He will be interviewed by Time Magazine Editor-in-Chief Edward Felsenthal.