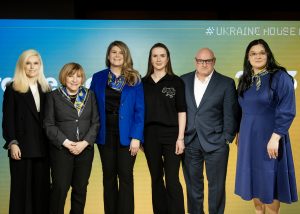 Andriy Shevchenko said, “every action you take can change someone’s life. This is a war of extermination, we are not only defending our territories, cities and freedom, we are defending our right to exist.” Dara Khosrowshahi spoke of what Uber has been doing to help transport people out of Ukraine and into Poland “the needs in Ukraine on the ground are so many… what I saw on the ground, I was so impressed with the entrepreneurship and activity. There is no doubt that a victory is coming. The people of Ukraine are so strong, but they can only keep strong if the world stands behind them.”

Scott Kelly put the war in perspective, “when you look at the earth from Space, some things are very clear. You do not see political borders from Space. We are all connected… The illegal and immoral invasion by Russia was a direct threat on democracy for all of us.” Ukrainian tennis star Elina Svitolina said, “we need to bring attention back to what is happening in Ukraine.” And Mykhailo Fedorov pointed out that “A victory for Ukraine is a victory for the entire world.”

The second day of events is going to end with a very special one hour sit down starting at 16.30 CET between First Lady of Ukraine Olena Zelenska and The Economist Editor in Chief Zanny Minton-Beddoes. This will be the First Lady’s first time attending the house in person after joining the house via video link in May last year. This is an invite-only event however as with all of the events, it will be livestreamed via the Ukraine House Davos YouTube page.

Prior to this will be an important day of panels around the theme of Humanitarianism and Defending Ukraine. At 12.00 CET the house will host the panel “Defending Our Freedom: Ukrainian Bravery on the Frontline” followed by “Answering the Call: Humanitarian Heroes to the Rescue” at 14.00 CET.

The Ukrainian President, Volodymyr Zelenskyy will be joining the house via video-link on Wednesday January 18th at 18.30 CET. He will be interviewed by Time Magazine Editor-in-Chief Edward Felsenthal.