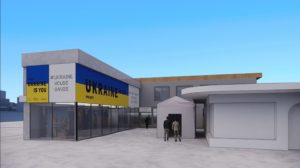 Ukraine’s leadership and ordinary Ukrainians have inspired the world with exceptional acts of bravery – from the battlefield to volunteering, from diplomacy to the economy. Western countries, along with other allied governments and conscious citizens around the globe, are united in unprecedented support for Ukraine. As President Zelenskyy declared in his historic address to the Joint Session of Congress recently in Washington, DC, «Ukraine didn’t fall, Ukraine is alive and kicking». Despite Russia’s brutal onslaught, Ukraine continues to remain united, defiant, determined, strong and resilient. This is not only a war against Ukraine, but an attack on the principles and values of the democratic world.

Ukraine House Davos will shine a spotlight on this incredible bravery and leadership and will also look at how to rebuild and invest in the future of a peaceful and sovereign Ukraine.

“At Ukraine House Davos this year, we will build on the global outpouring of support for Ukraine that has united the democratic world over this past year”, said Ulyana Khromyak, Executive Director, Ukraine House Davos. “This year has been immensely challenging for Ukrainians, with the hardships, pain and suffering continuing every single day. Knowing that the Davos and wider international community stands with Ukraine has been a great source of strength for our nation. We must defend our sovereignty, keep fighting for our freedom and European future, and look forward to rebuilding and revitalizing our great country. We are honored to host world-renowned international speakers, first class moderators, and most of all, inspiring Ukrainians who are defending their nation on the frontlines as well as supporting the country’s ongoing resilience and resistance using every means possible. We look forward to welcoming you to Ukraine House Davos.”

Amongst the speakers will be high-level Ukrainian officials, mayors of besieged Ukrainian cities, global policy makers, humanitarian activists and international business leaders, journalists, and supporters of a free Ukraine. A special panel will introduce Ukrainian heroes, fighting in the most dangerous hot spots. Full list and registration at www.UkraineHouseDavos.com, including:

This year, Promenade 59 has become a joint space for Ukraine House Davos and Ukraine is You project, which is organized by Victor Pinchuk Foundation in cooperation with the Office of the President of Ukraine. Ukraine Is You includes an exhibition about liberation and hope, and about the war crimes Russia has committed and continues to commit during its assault on Ukraine and Ukrainians. Discussions and events invite guests to explore these topics with people working on the ground in Ukraine as well as world leading thinkers and representatives of business and politics focused on supporting Ukraine’s defense of freedom and life.

Ukraine House Davos will open its doors on Monday, January 16th at 5 pm CET through 10 pm CET on Thursday, January 19 the.