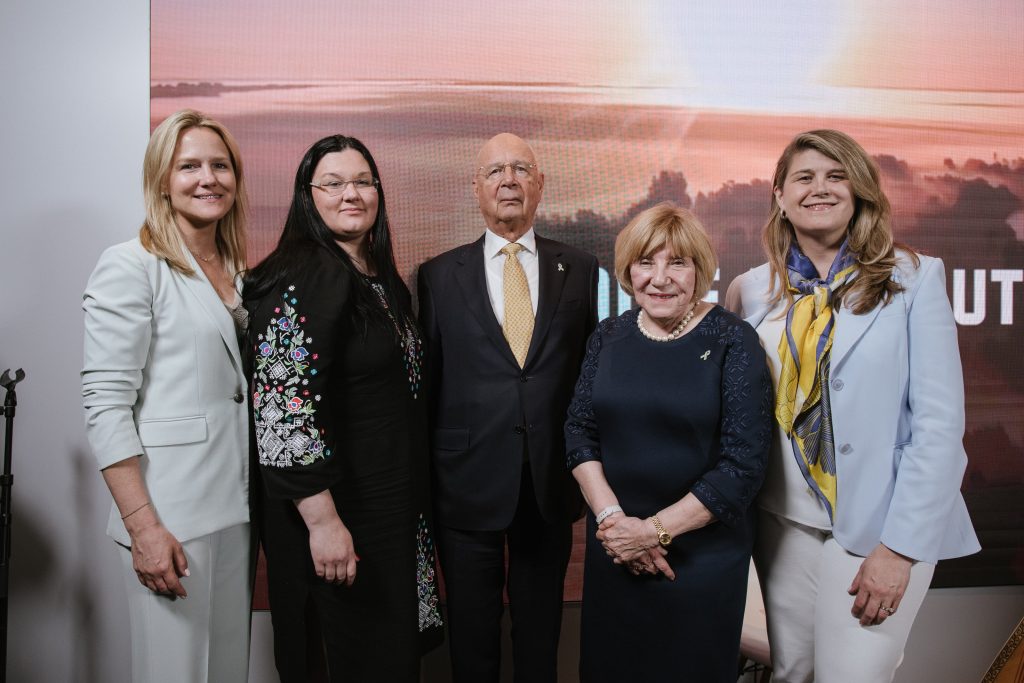 25 May 2022, DAVOS, Switzerland – Klaus Schwab, the Founder and Executive Chairman of the World Economic Forum, visited Ukraine House Davos on the third and final day of events and panels which focused on Ukraine’s future once the war is over and how the country can rebuild through international cooperation.

Showing his support and solidarity with Ukraine, Klaus Schwab said: “You showed the world that Ukraine is deeply rooted in European culture with its own Ukrainian dimension. The most important thing we can do is maintain the spirit of unity. Ukraine House is a great demonstration of unity in a globalised world.”

“The Ukrainian people have shown incredible bravery, and as President Zelenskyy said, freedom must be fought for, every country has a right to peace and freedom. I have always asked, why is it possible that people start wars, and so I have devoted my life to bridge building, so for me when I think of what is happening in Ukraine it was a shock, I never thought a war would happen in Europe again. It was a call to make sure this does not happen again”

The day started with a conversation between Dmytro Kuleba, the Minister of Foreign Affairs of Ukraine, and Ambassador Paula Dobriansky. He explained the practical, necessary steps that foreign powers must take to support Ukraine considering the global geopolitical ramifications of this war. As part of this, he re-emphasised that the EU must stop buying Russian oil and gas: “As long as the EU keeps buying Russian oil and gas, Putin’s pockets will be full.”

This was followed by a panel of economists including Yulia Svyrydenko, the Minister of Economy of Ukraine, who outlined a blueprint for the reconstruction of Ukraine, highlighting both the opportunity and necessity to build back better through mechanisms such as green technology.

Nobel Laureate Joseph Stiglitz stated, “The green transition, the digital transition, and the manufacturing to service economy transition are all major issues for countries globally. One needs to see this as an opportunity – how do we go about integrating and building back both hard and soft infrastructure in ways that support the green transition? Weaning yourself off Russian oil is a really important example.”

Later, Prime Minister of Ukraine Denys Shmyhal delved deeper into the process for raising capital in his panel discussion on how to “Rebuild, Restore, Renew and Revitalize Ukraine.” He reminded the audience that for Ukraine to be “reborn from the ashes”, not only must people continue to use the United 24 platform for donations, but that Russian assets should be confiscated and used for Ukrainian reconstruction.

The final panel of the day heard from a number of women parliamentarians including Ivanna Klympush-Tsintsadze – Chair of the Parliamentary Committee On Ukraine’s Integration Into the EU and Yulia Klymenko – Member of Parliament for Ukraine, who spoke on their vision for a future Ukraine.

While each panel covered different topics, they all referenced the need for continued international cooperation – especially when it comes to the economy. As explained by Ukraine’s Minister for the Economy, Yulia Svyrydenko, “The military may win battles, but the economy plays the key role in winning the war. That is why it is so important to have support from economic partners.”

Follow the event via social media on #ukrainehousedavos and at: